In total, 112 participants helped archive important data and plan next steps during Data Rescue NYC. Meet some of the people that volunteered their time and experience to help accomplish our archiving goals.

Radu is a software engineer and works for large financial institutions in New York. He is originally from Romania and was involved in pro-democracy demonstrations of 1990. He’s worried about non-democratic tendencies in the new administration. Team: Data Harvesting 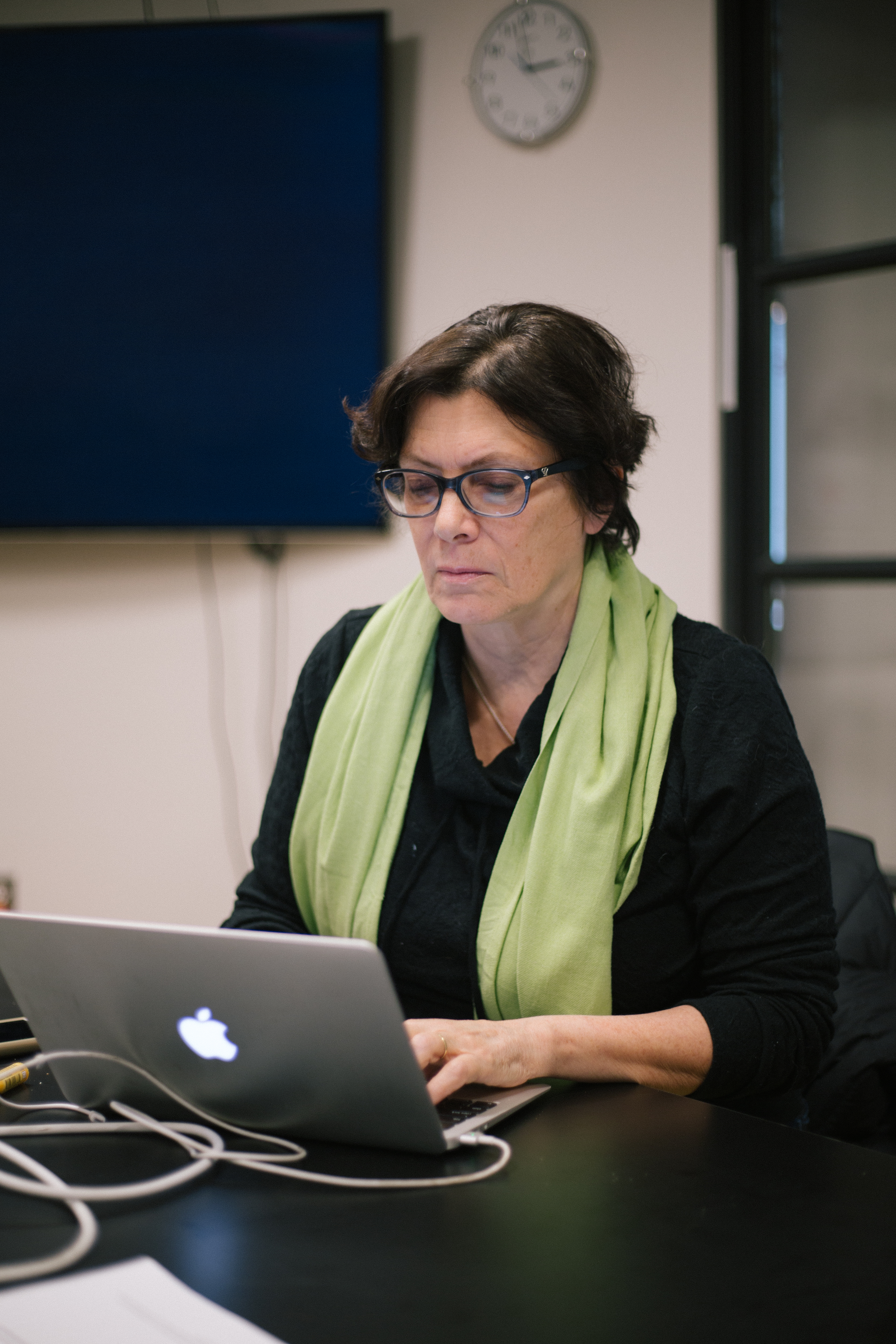 Barbara is a scientist at New York Botanical Garden, which preserves plant specimens from around the world. She is a botanist and is a plant specialist. Her team is responsible for generating a lot of data, but they also use a lot of data in order to understand effects of environmental change on plants. They aim to make this data available to users. Barbara worries that their user data would lose a lot of value if government data wer lost. Team: Storytelling 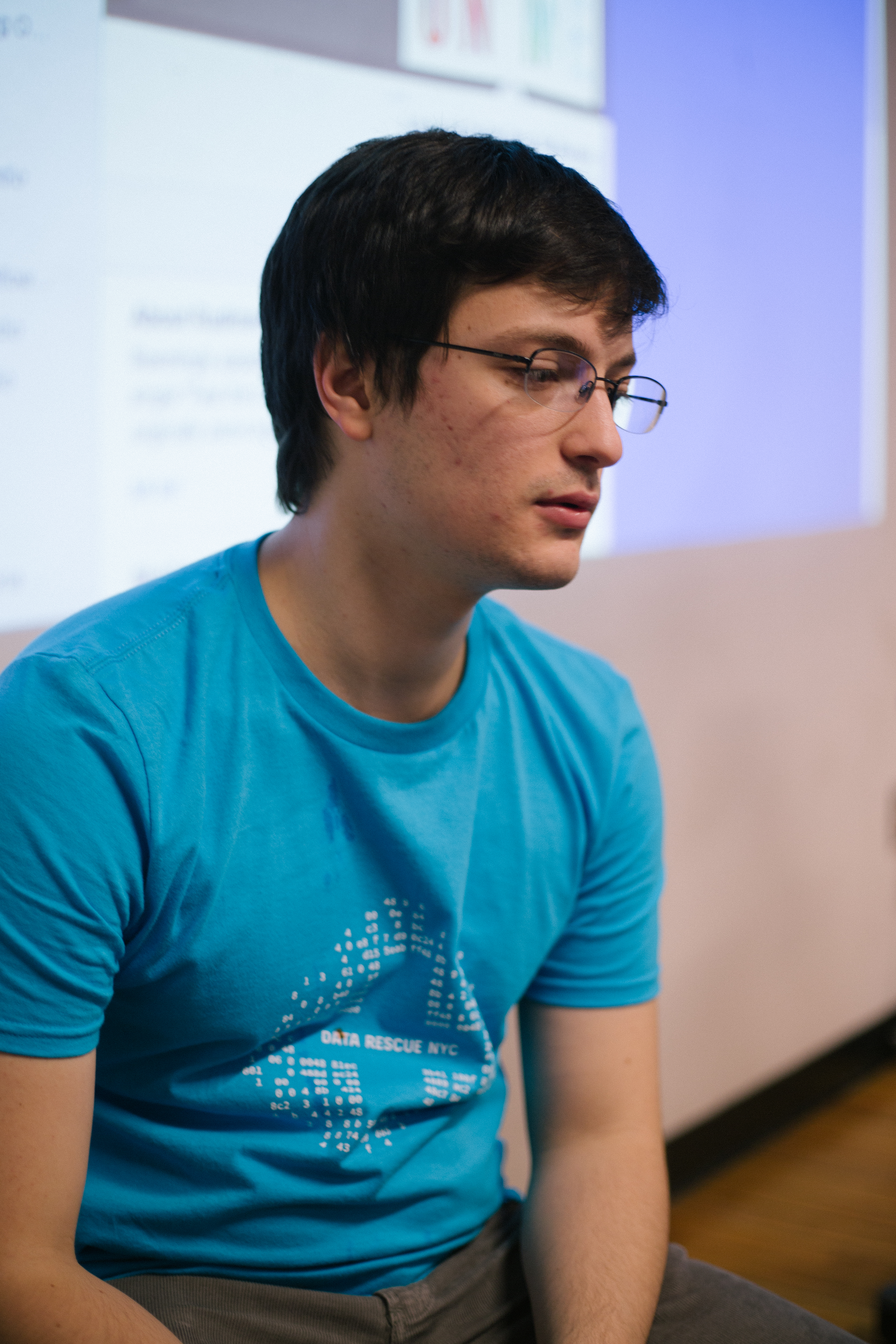 Tomas is an NYU student in Public Health and Anthropology. He heard about Data Rescue NYC through his department. He believes that preserving climate data is important, particularly for future generations. “We can’t just have this be erased.” He believes that, in order to ensure that we understand climate change, it is important that years and years of work are not lost. “That would be a tragedy.” Team: Web Archiving 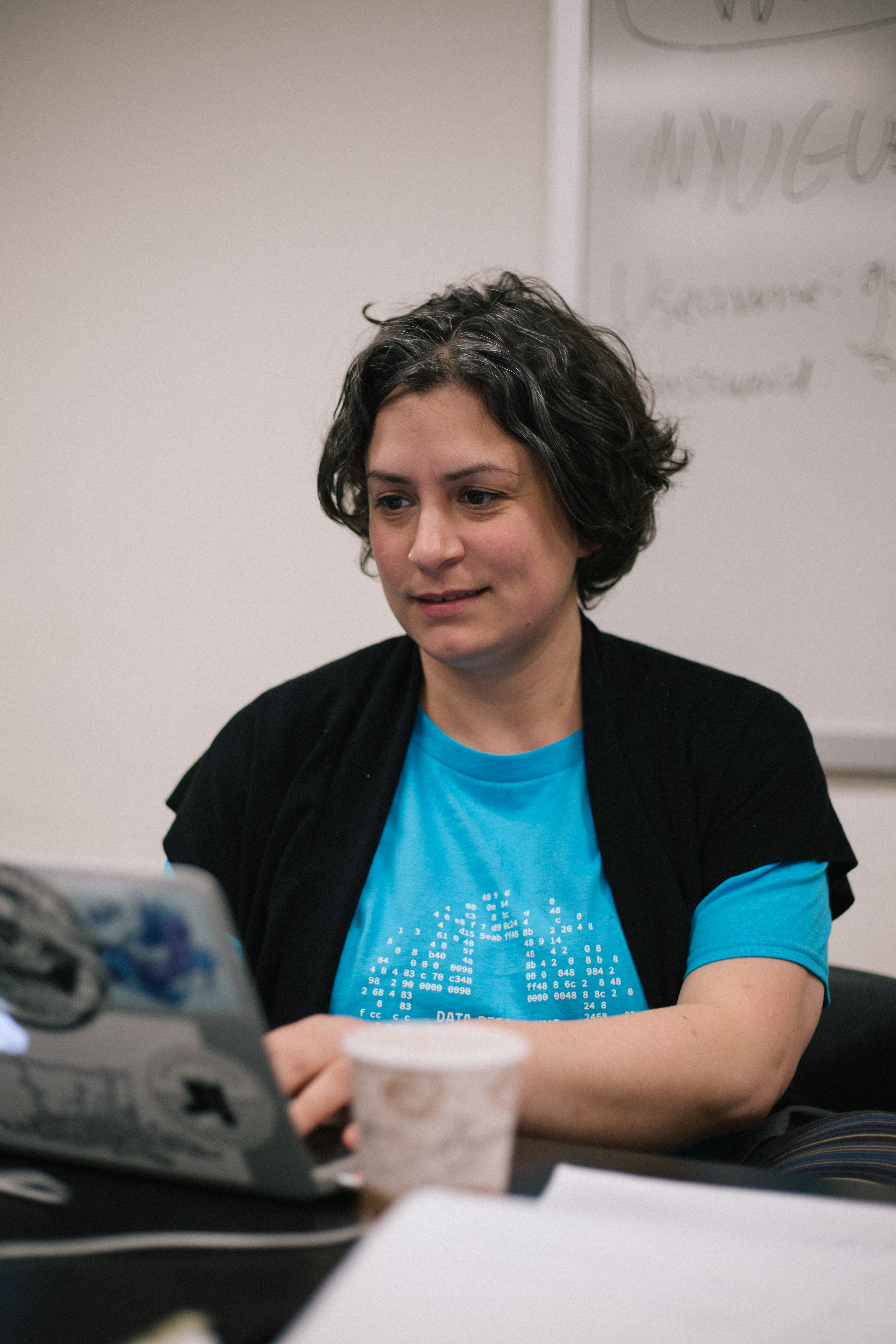 Bronwen is a librarian, and she runs a maker space, so she straddles the research and DIY worlds. She is also a regional organizer with Public Lab, and that’s how she knows about these events. She’s here because she recognizes the importance of people having ownership of information about their world in order to make decisions and effect change. “The first thing you need to be able to do is learn about the world you’re in, and the challenges you’re dealing with. Keeping this data available is one tool in that tool chest.” Team: Storytelling 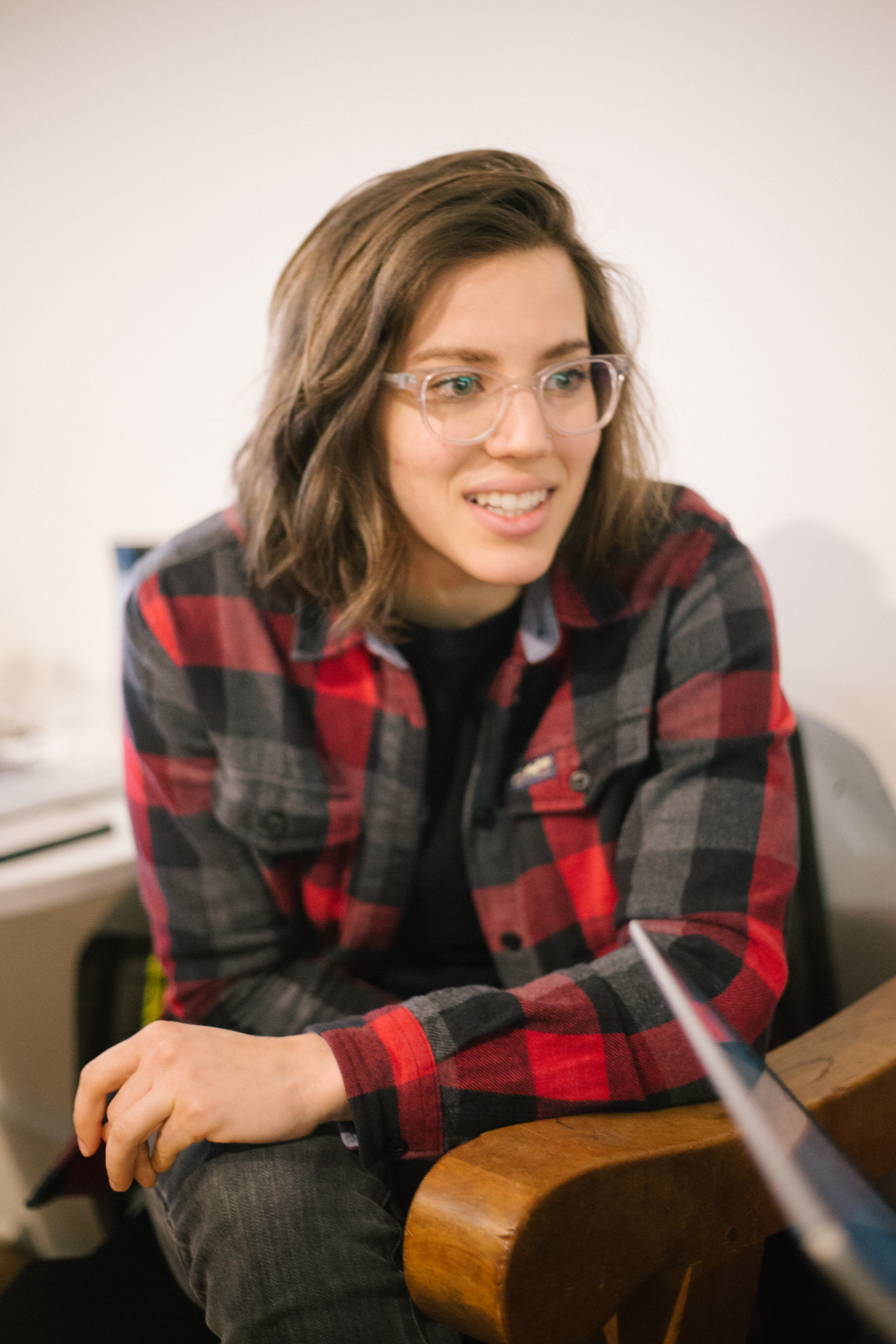 Miriam is a software engineer at Etsy. For Miriam, Data Rescue NYC seemed like a good way to ensure the continued accessibility of government datasets even if the current administration decides to clamp down on data. She’s feeling good about the work; her and a collaborator had a script running and were harvesting data at the time of our interview. Team: Data Harvesting 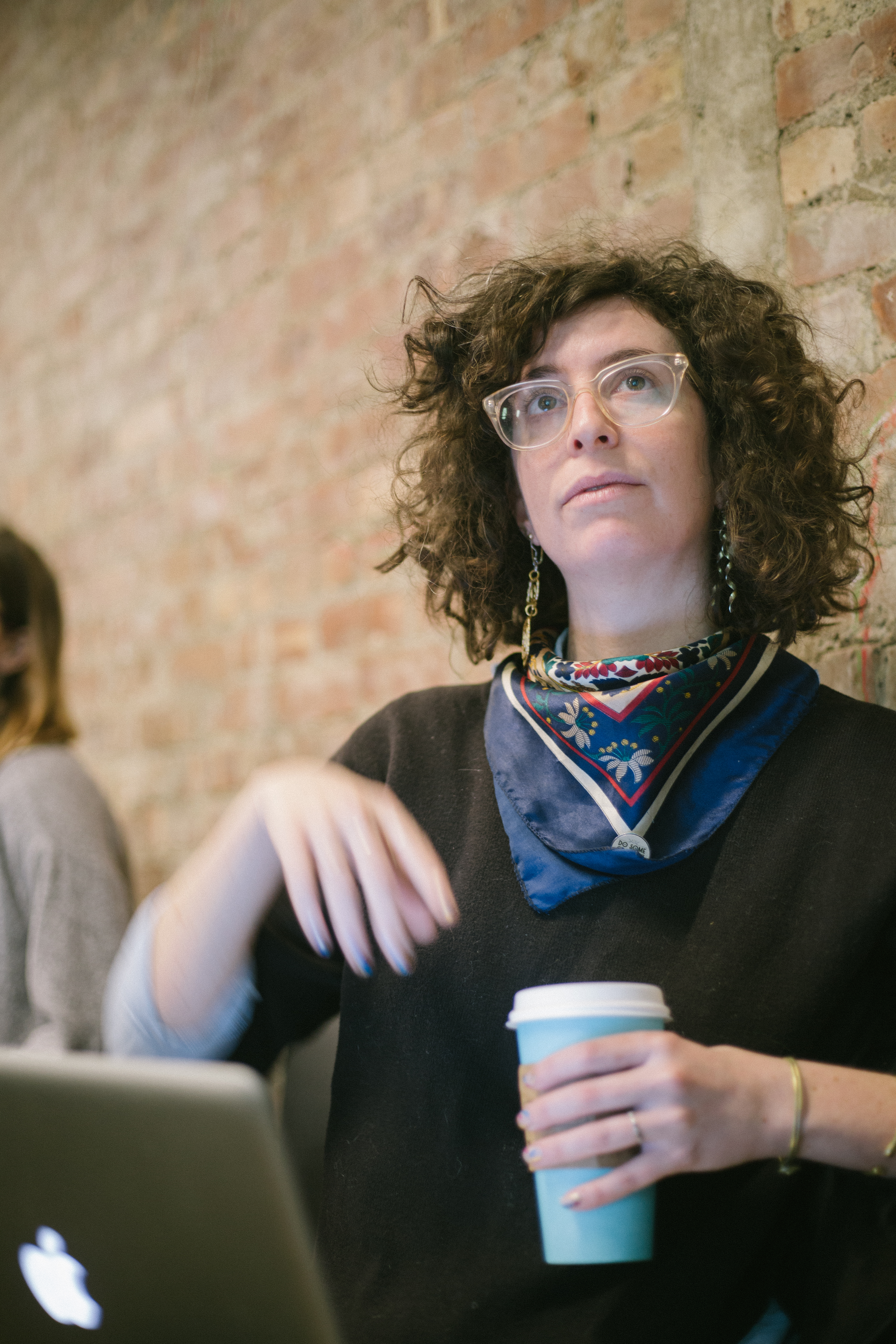 Alexandra is a librarian and an archivist. She found out about Data Rescue NYC through Facebook and decided to attend because she believes in preserving this data and making it accessible: “It can’t just be deleted; that would be wrong.” She noted that she can’t make it to every protest and doesn’t feel comfortable in large crowds. She also often feels sad after protests, recognizing their importance but also wanting a more tangible result. She says that this is something that she knows how to do and is happy to volunteer her time so that other organizations can get research done. “I’m inspired by how many people are here. It’s pretty amazing.” Team: Web Archiving

Mood: a little sleepy but inspired 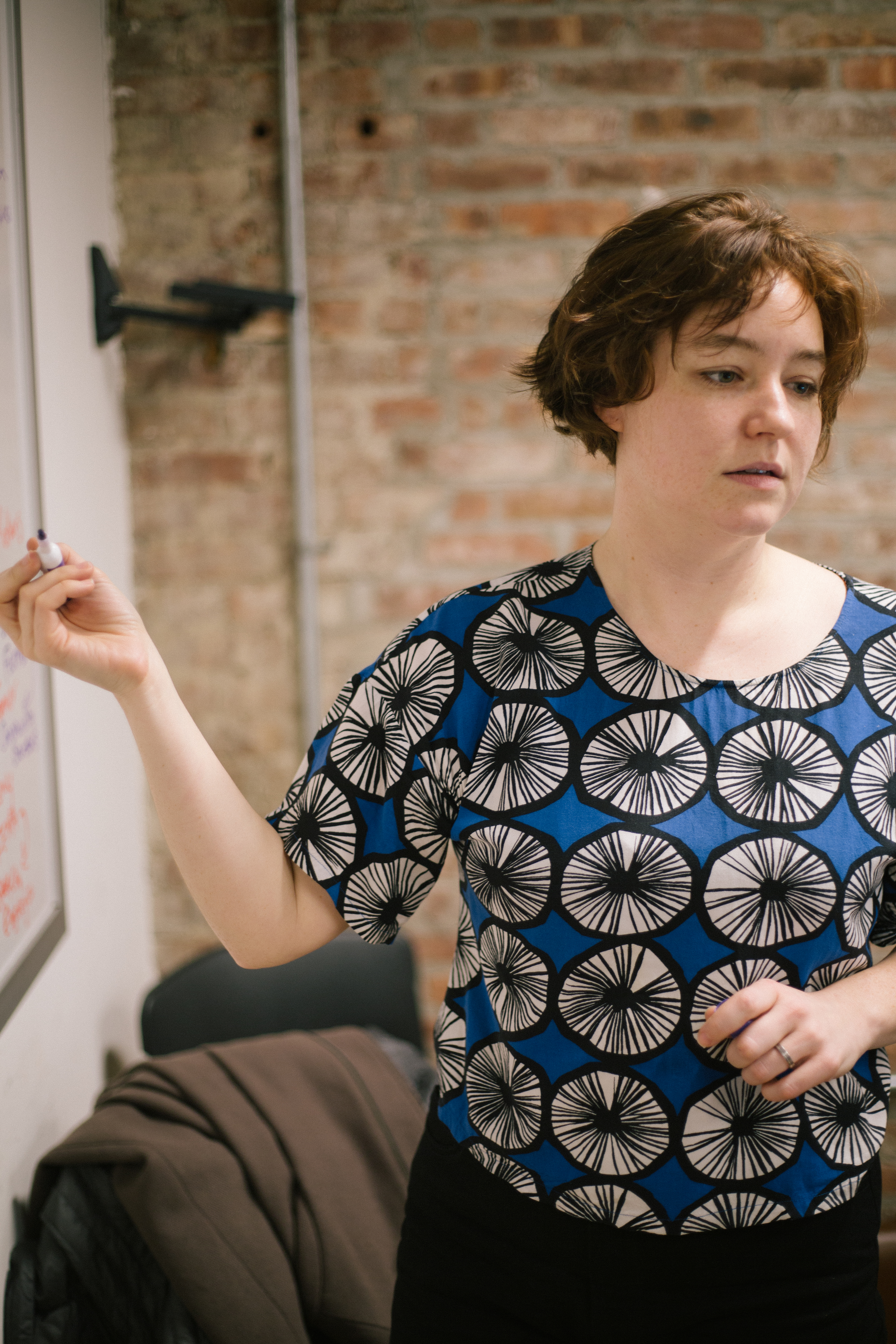 Alyssa is a transportation planner at the Regional Plan Association and focuses on long-range vision for sustainable transport for New York, New Jersey, and Connecticut. She started her career as an environmental scientist monitoring air quality and public health research. “Data is so crucial to what I do as an urban planner and what I did as a scientist.” She believes that federal datasets have some of the most robust qualities that localities and municipalities need. Team: Storytelling 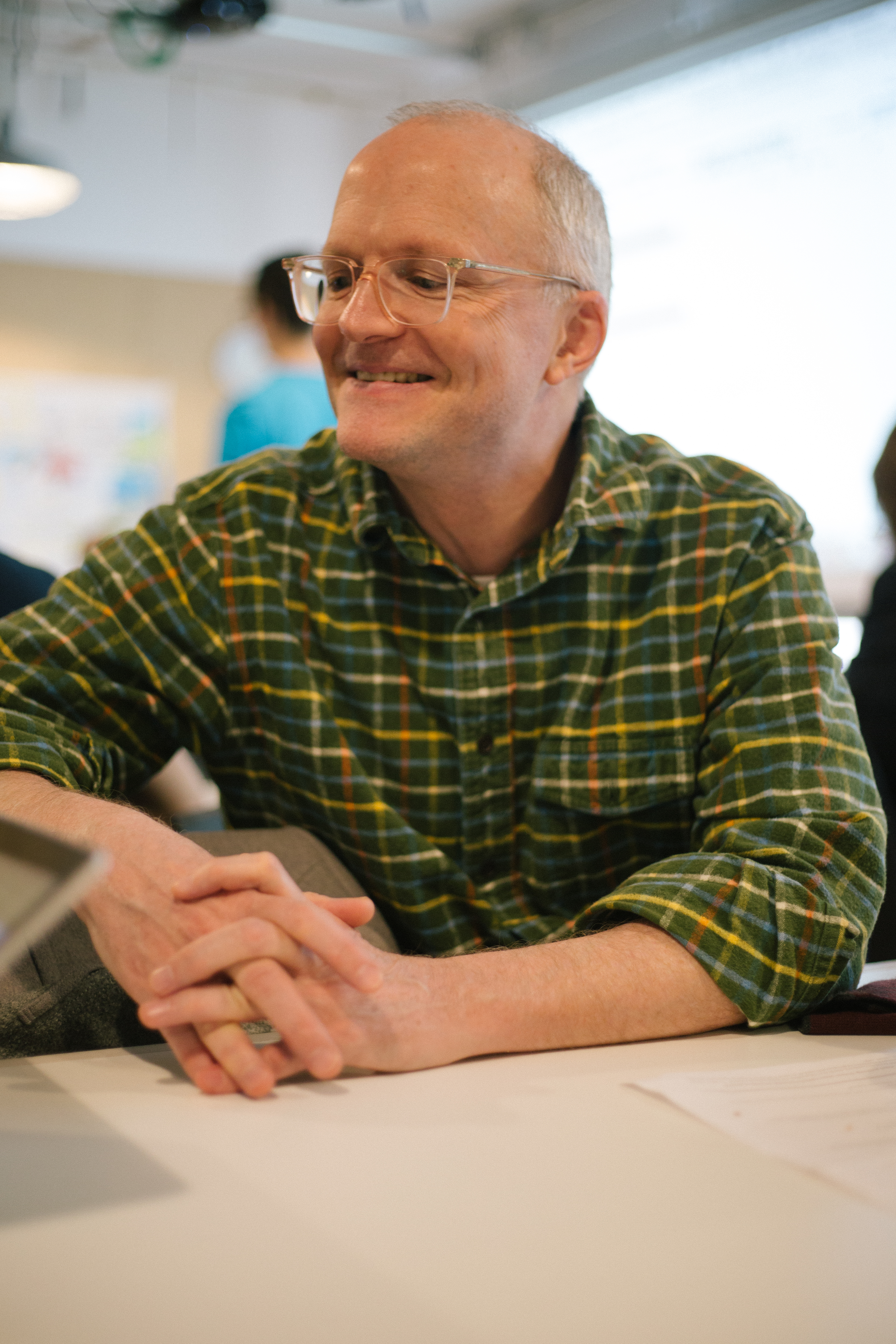 Gus is a software engineer at the New York Times working on digital asset managements systems. He’s also a student at Pratt working in the Spatial Analysis program, and that’s how he heard about Data Rescue NYC. He has general concerns about the new administration and wanted to do something useful. Team: Data Harvesting 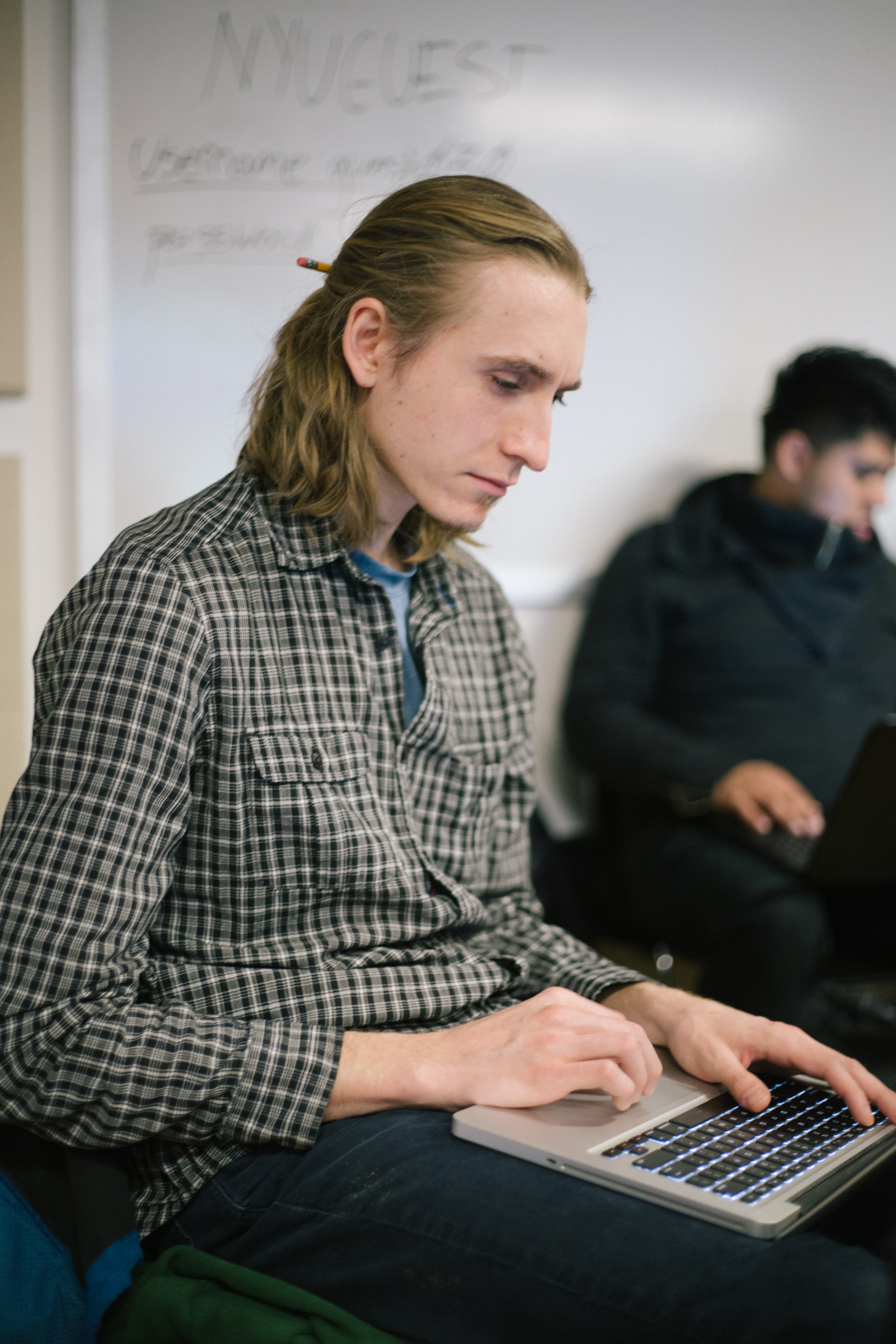 Charles works at New York botanical garden in the Bronx as an information manager and database administrator for the William and Lynda Steere Herbarium in the Bronx. The Herbarium has a historic plant collection library, where scientists studying plants keep specimens for research. Charles works on the digital collection and virtual Herbarium. He learned about the event from a colleague, who sent out an email to all the people in the Herbarium. “It’s similar to what we’re trying to do.” He notes that they aim to store information on plant specimens forever. “We’ve learned that federal data is not a stable as we thought. It was taken for granted that government data would stay online.” Team: Web Archiving 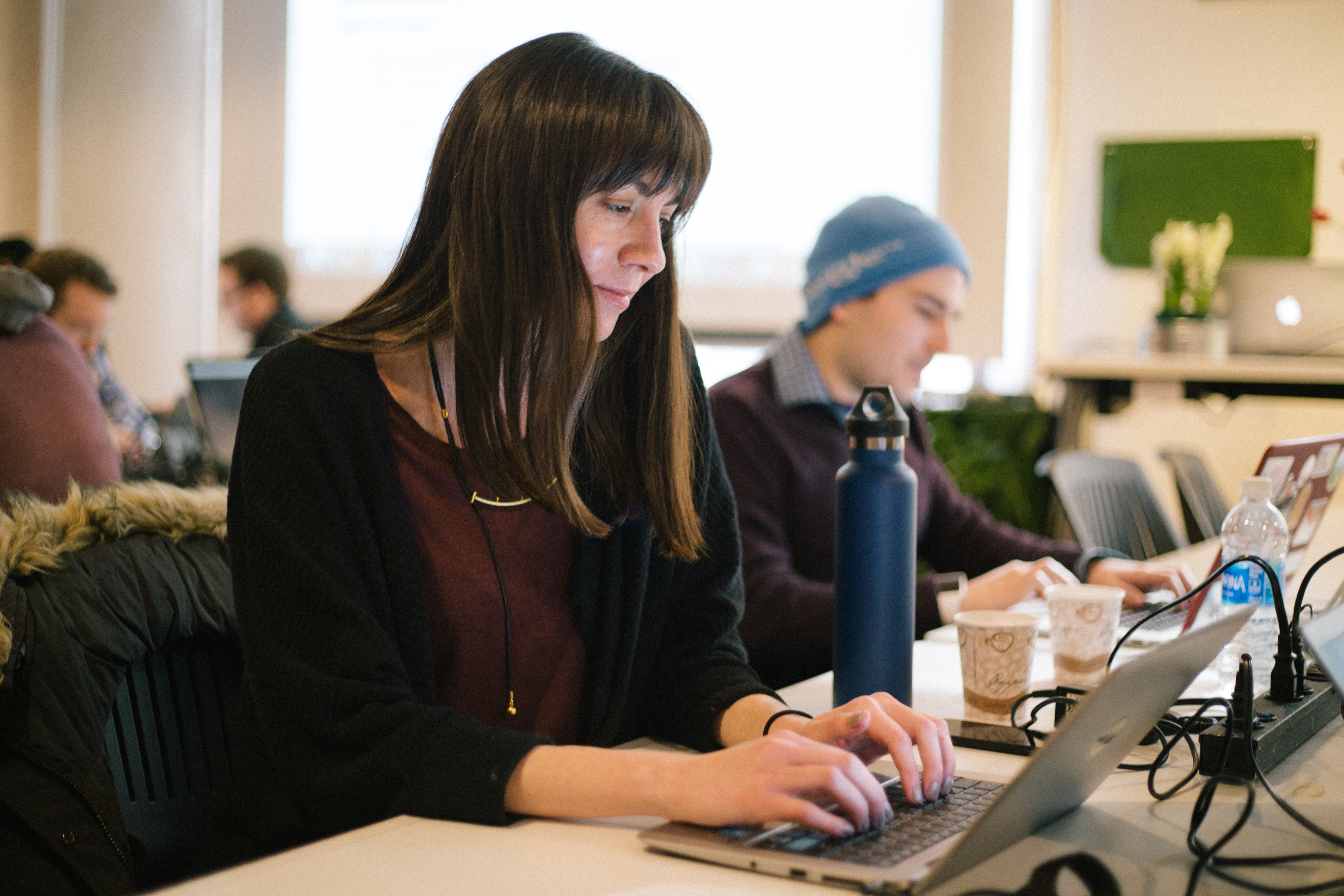 Shawn Averkaamp works for the New York Public Library. Normally he works with completely different types of data compared to this event where he’s been mainly working with assessing government datasets. “Seeing how others work and manipulate code is really fascinating and reveals a bit of personality with each line.” Team: Data harvesting 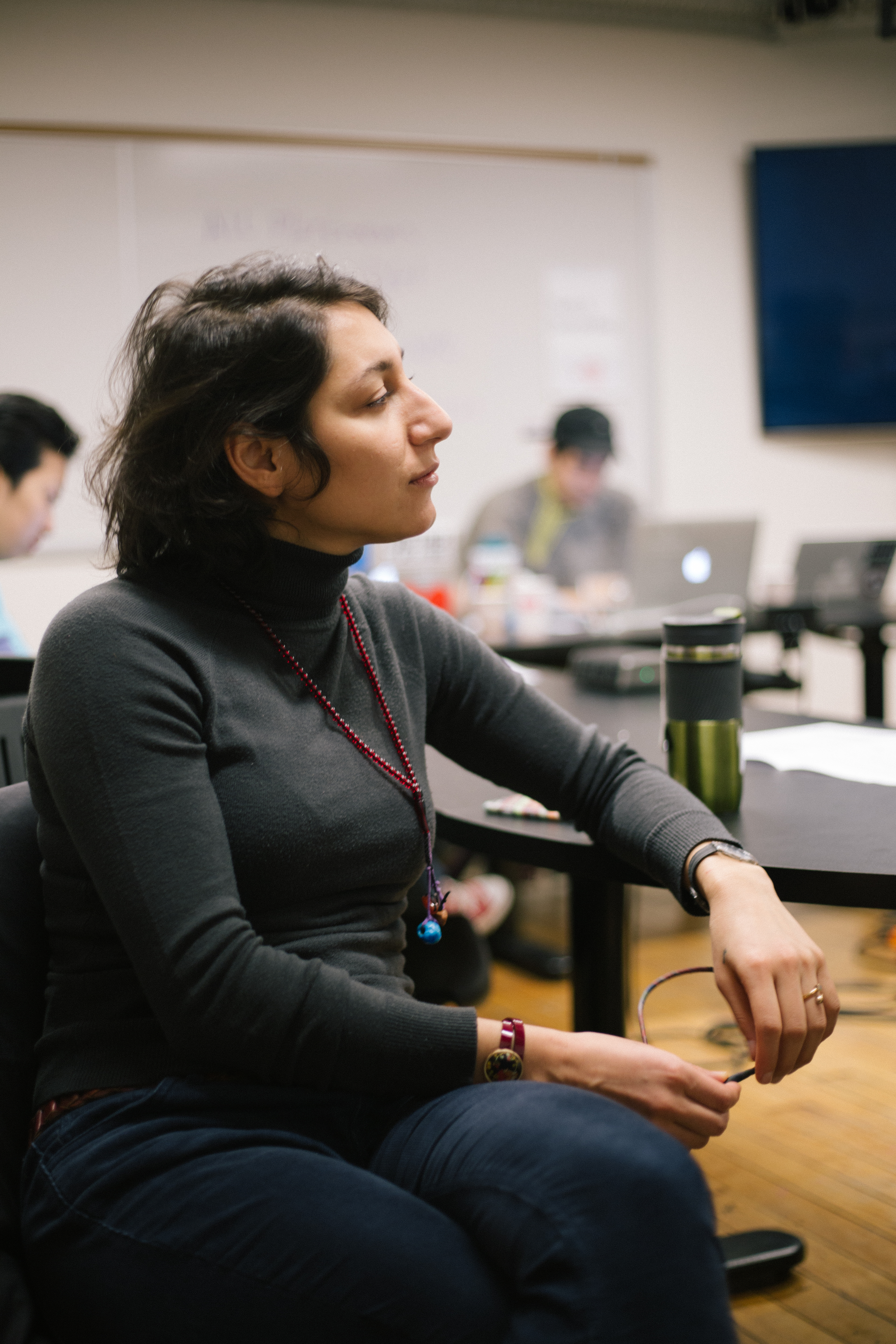 Samira is a PhD student in Mechanical Engineering at Stonybrook University. As an engineer or scientist, she thinks her first responsibility is to keep the planet alive. After she heard the news that EPA data was in danger, she thought of joining Data Rescue NYC to help out in whatever way she could. Today, she’s been working to develop a narrative for the work through stories that bring data to life. “We’ve been aiming to make a case for why this data needs to be archived and how the data is actually saving lives.” Team: Storytelling

Mood: inspired and on edge